I was born 7th August, 1942 at Hokitika. The family moving to Rakaia in 1955, which led to secondary school at Ashburton High, thence to the University of Canterbury, where I took first class honours in chemistry, and subsequently a PhD. My University years also led to two other interests. I started writing fiction (Gemina) at the end of my first year as an undergraduate, but gave up after being rejected by three (!) publishers. I also took an interest in musical composition, and it was then I took an interest in de Broglie's pilot wave interpretation of quantum mechanics. I had post-doctoral positions at the University of Calgary (1967), the University of Southampton (1968), and the University of New England, at Armidale, NSW. On August 23, 1968, I crossed the border into Czechoslovakia from Poland at Cieszyn to begin an unusual three days due to the Russian invasion. I returned to New Zealand in 1971, to work at Chemistry division, DSIR, to work on lignin chemistry, and thence to recycling, biofuels, synthetic fuels and seaweed chemistry.

I married Claire Craigie in 1972, and we had two children: Helen (thence two grandchildren) and Roger. The wedding ceremony and Claire's funeral included the only public performances of my music so far. 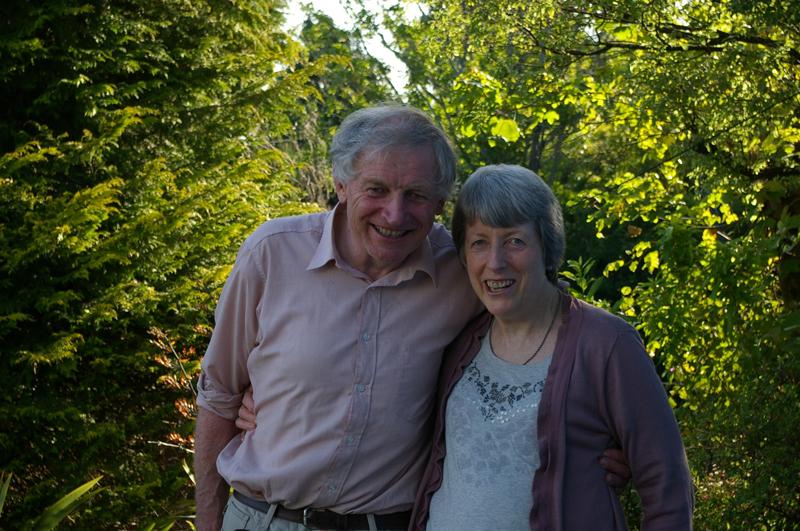 My position as a potential expert in energy-related matters came to an end when the Motunui Synfuels plant was proposed. I opposed it as too expensive, and when this was rejected, I became an advocate for a project to make pyromellitates from the durene byproduct, which led me to set up Carina Chemical Laboratories Ltd. A joint venture won the rights to the durene, $5 million was invested in plant design, etc, then the venture collapsed when the New Zealand Government, which owned the durene, elected to sell the fuels plant without the supply contract obligation.

I have maintained Carina (see the Applied Science page). Following the collapse of the durene project, I also started writing again, and eventually I have self-published the fiction as ebooks

I am now semi-retired, and spend my time writing, and with my cat Horatio. A spotlight bio regarding my fiction can be found here. The picture above is of Claire and me in our front garden, in better times. Claire died of cancer on the 16th January, 2015.

My fiction writing has been heavily influenced buy what occurred in Czechoslovakia, by my travels, by my experiences with business and political machinations during the 1980s, and by a desire to try to show what science is really about, and what scientific thinking involves. Apart from the book on Biofuels, which is intended to outline the issues and show how and why they should be important, my scientific writing has been mainly to archive my theoretical work.